I’m not sure exactly how this blog will evolve, but for the time being, I think it is just going to be a place where I’ll share thoughts of inspiration of designs in needlework world.  Some of these inspirations may lead to me producing a design; some, as I have learned, just lead to a dead end.

It is illustrated with needlework from the collection of Winterthur (and I expect Winterthur will be the source of plenty of future blog posts).  I found something interesting in the Table of Contents: 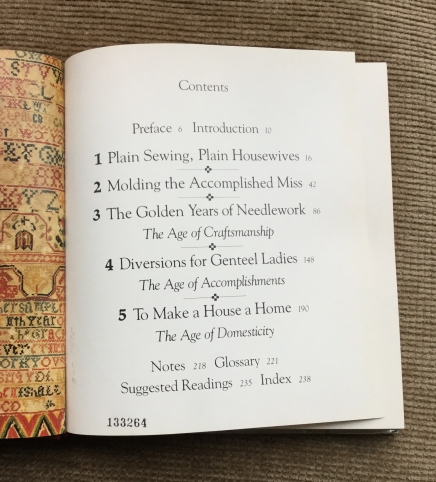 As written out in the preface, the author makes a case for three eras of needlework during this time period, with the claim that the finest work was done before 1785.  Interesting!  Again, this will no doubt lead to another blog post in the near future.

But, in getting to this image near the end of  Chapter 3, I was just stopped in my tracks, so to speak.  I felt like I recognized the object in the picture:

The description:  “Mary Foote, who lived in Colchester, Connecticut, created this darned bed rug, presumably for her marriage in 1778 to Nathanial Otis.  Mary started with a plain woven woolen ground and sewed her design in large, blue darning stitched, pulling each stitch level and taut; she did not leave raised loops, customarily found in bed rugs.  She completely covered the white background in an even-textured darning pattern.  Mary’s sister Elizabeth made a very similar rug, now owned by the Connecticut Historical Society.  A third one, probably by her sister Abigail, is at Historic Deerfield.”

(A bed rug was a term used in the 18th century for a heavy covering on a bed, usually consisting of sturdy background fabric densely set with evenly raised loops of yarn.  During this time period, floor coverings were called carpets.)

I felt like I recognized this piece in the picture, particularly the blue color of the flowers, but not because I had seen it at Winterthur.  My mind flew to the one and only time I had ever been to the Connecticut Historical Society…and my body flew to my bookshelves.  There, I pulled the book from the exhibit I saw some years back:

In 2011, as I learned once I opened it up and began paging through.  And I was absolutely right.  There was Mary Foote’s sister’s bed rug.  Elizabeth’s was on display during that exhibit. 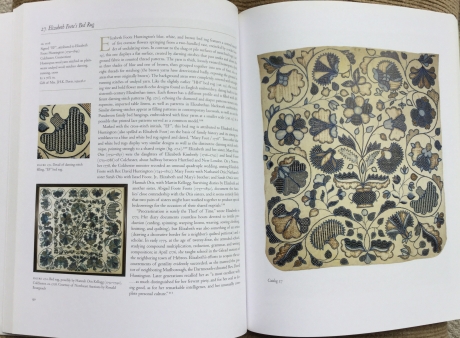 I remember it as one of my favorite pieces, despite the fact there were a number of smaller cross stitch and embroidery pieces as part of the display.  (Mary’s bed rug is 83″ x 77″; Elizabeth’s is 82″ x 76″.)  The colors, the design – it just grabbed me.  I’m glad that my reading through this newly acquired book has brought me back to the piece that I enjoyed seeing long ago.  And I’m inspired to see if a design can be born from all of this in some way.

Not to mention the fact that I’ve now gone down the rabbit hole of looking at the entire exhibit catalog from that Connecticut Historical Society Exhibit and finding more inspiration in a number of the other pieces.

One thought on “Inspiration from reading…”