If you’ve read the two previous posts (and if not, you might want to go back and do so 😊), I’ve been sharing about a needlework I created a few years ago, a recreation in needle and thread of a 10 foot by 10 foot mosaic.  There really were two different aspects of the journey:  the designing and stitching challenge of what I was doing and the historical research behind the original piece.

After I had graphed out the general dimensions and planned for stitches to use for the center wheel and background areas, my focus turned back to those squares.  It was the square just to the left of the twelve o’clock position that puzzled me most.  Frankly, it looked to me more like a 19th or 20 century quilt block and so different from other squares. (I tried in vain to find similar squares in other Antioch mosaics; this one remains its own unique oddity in my mind.) Putting aside my queries about the inspiration of the mosaic artists from long ago, I faced my own challenges.  Because it seemed to be the easiest to graph out, I began with graph paper on this square.  It would be the one on which I would base the size of all the others.

Here I was back to studying my photographs carefully – and taking moments to smile.  For while I needed to be precise in plotting my design with graph paper and pencil, I could see where the original mosaic artist fudged some things.  For example, the red and white check rectangles in this square are not all the same:

The top one is six by eight tiles; the others are closer to five by nine tiles. Some rows do not even line up. When your medium is stone tesserae, you can do this. When your medium is thread stitched on fabric (in this case, cross stitches on silk gauze) you have to force the design into a precision that the original does not always have. Plotting out these squares I had to make decisions such as these. And I always did with a smile. For there was no way that a person working in the third century AD could have imagined what this person in the 21st century was trying to do in recreating his work.

And that was how I had to do mine as well, stitching the cross stitches into a diamond shape instead of a square shape. This then became a silk gauze challenge, for the 50-count-over-two that I had used for the other squares was too big for the design. 64-count-over-two worked, although it resulted in a slightly smaller square. But I was satisfied that it was good enough.

Just to share a little more on the history front, I was able to find a number of historical photographs of the actual mosaic to capture its life while at Wellesley College since arriving in 1936.

A few last pictures of my work…. 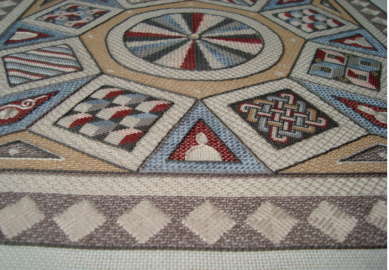 There is nothing that comforts me more than putting needle and thread to fabric or canvas. I've been stitching since I was a teenager, exploring all types of needlework - cross stitch, canvaswork, counted thread techniques like blackwork and Hardanger...you name it. All these years of stitching have led to my own design business. Most of my designs are cross stitch patterns, but I have also enjoyed creating beginner level canvaswork designs and blackwork patterns as well. View more posts